Tales from a Poplar tree 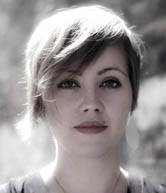 Ösp Eldjárn grew up in the beautiful valley of Svarfaðardalur, Iceland with her musical family. Together they would play folk and traditional music and perform professionally together across the country. In 2010, along with her brother and close friends, they took to the stage as a band called 'Brother Grass'. The folk/americana/blue grass group released two albums together and have gained a loyal following in Iceland and other countries and have had airplay on BBC3 Radio.

After studying jazz singing, Ösp moved to the city of London in the autumn of 2011 to pursue a solo career and to broaden her musical direction. Inspired by the vocals of Ella Fitzgerald, the stories of Joni Mitchell and by her own nordic and folky roots, she began to write her own original material. In her music, Ösp carries with her a fine Icelandic tradition of soaring melody lead songs of glacial beauty and real emotional power. Capable of both the epic and the intimate she’s possessed of beautifully evocative voice and is backed by a keenly sympathetic band.